The Speedmaster Silver Snoopy Award 50th Anniversary is a very special timepiece. It’s not only technically superb and aesthetically unique with its playful side, but it also pays tribute to OMEGA’s passion for space exploration. Here we look at the significance of the model as well as the details of the impressive timepiece.

Snoopy acts as the safety “watchdog” for NASA, whilst representing total mission success. He became so loved by astronauts, that they created a very prestigious prize in his name. The award is presented by the astronauts themselves, and is given to people or companies who they believe have contributed significantly to “the success of human space flight missions.” To be personally recognised by the flight crews in such a way is considered to be a highly esteemed honour. 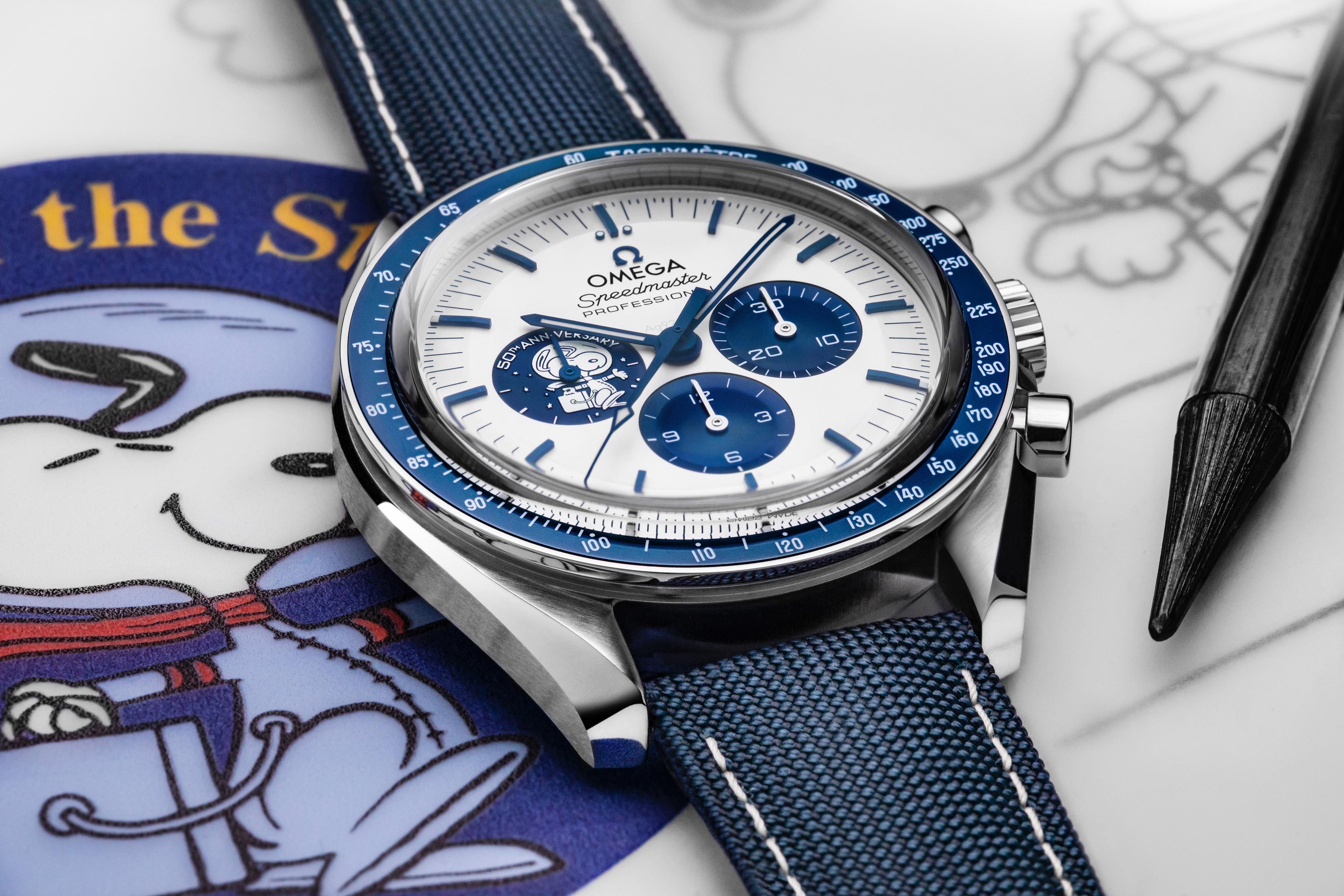 In 1970, OMEGA received the coveted “Silver Snoopy Award” from the astronauts at NASA, recognising the brand’s unique contributions to space exploration, as well as the Speedmaster’s vital support during the rescue of Apollo 13.

Exactly 50 years later, a special timepiece has been created in the occasion’s honour. Combining animation with watchmaking art, this incredible Snoopy tribute has taken the OMEGA Speedmaster to new realms of design.

The watch lover’s favourite beagle plays a prominent role within the timepiece, first appearing as an embossed silver medallion on the blue subdial at 9 o’clock. He is shown wearing his famous spacesuit, in the exact style of the silver pin that NASA astronauts give to award recipients.

The dial itself is also silver and laser-engraved with Ag925. It includes two more blue subdials, as well as blue PVD angle-shaped hour-markers and hands, creating a statement-making design. 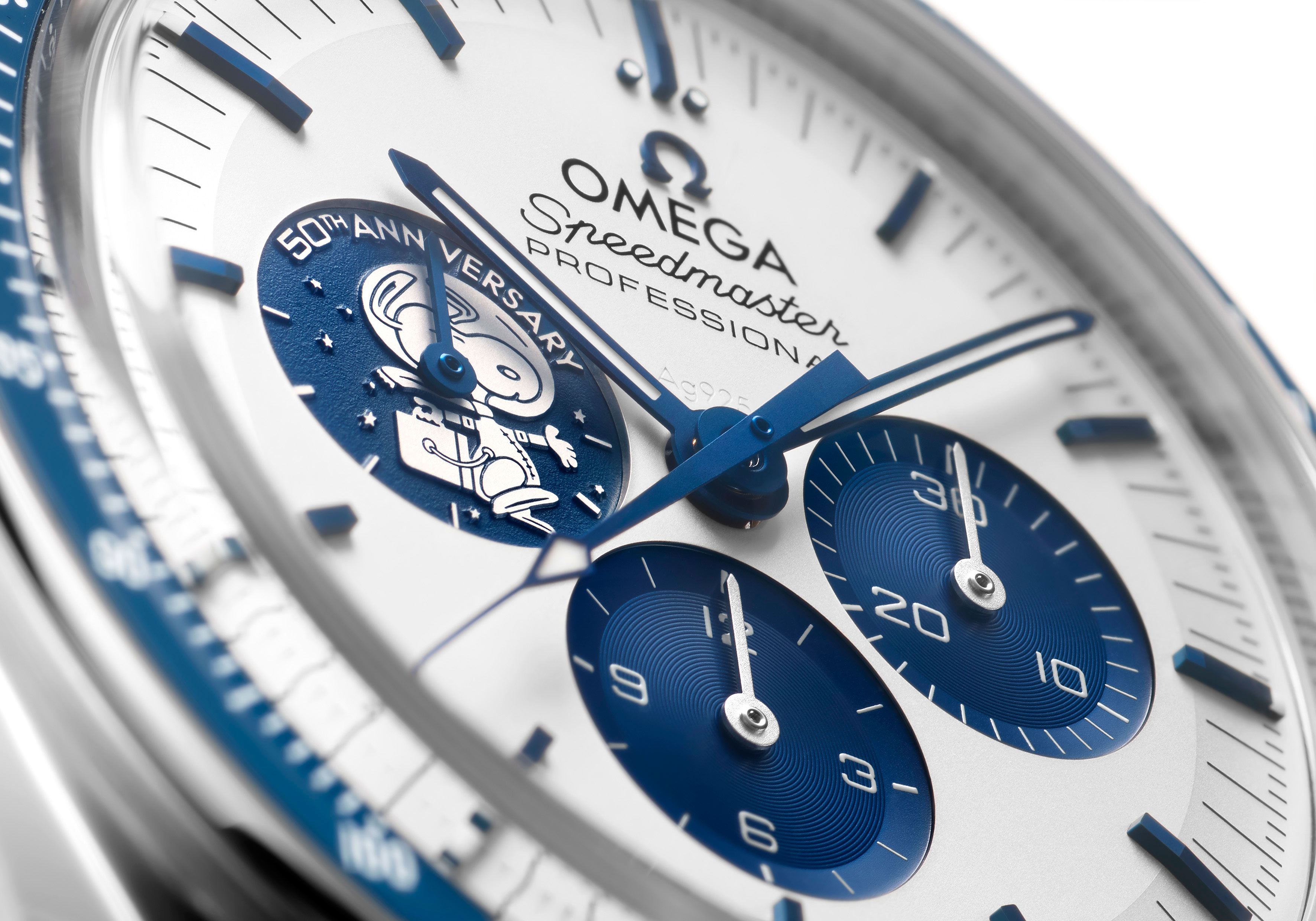 On the case-back, the fun really begins! This time, Snoopy has gone into orbit, thanks to his animated black and white Command and Service Module (CSM) on a magical hand. When the chronograph seconds hand is in use, Snoopy takes a trip around the mysterious far-side of the moon – just like the Apollo 13 crew – with the lunar surface being decorated on the sapphire crystal using a unique micro-structured metallisation.

In the distance, a vision of our home is included. This Earth disc rotates once per minute, in sync with the watch’s small seconds hand, and symbolises the precise rotation of the Earth. The iconic quote, “Eyes on the Stars”, is included within the black universe.

The NAIAD LOCK keeps all caseback engravings in the correct, upright position, including the date in 1970 that OMEGA received the Silver Snoopy Award, as well as a tribute to the imperilled Apollo 13 mission that same year.

Showing OMEGA’s superb attention to detail, the watch’s blue nylon fabric strap matches the other blue elements of the watch, and even features the trajectory of the Apollo 13 mission, embossed on the lining. This strap is attached to a 42 mm case in stainless steel, which is inspired by the 4th generation Speedmaster style (the first watch worn on the moon in 1969). The tachymeter scale, with the iconic “Dot over Ninety”, is shown in white enamel on a blue ceramic [ZrO2] bezel ring.

In a superb display of watchmaking skill, the Speedmaster “Silver Snoopy Award” 50th Anniversary watch is driven by the OMEGA Co-Axial Master Chronometer Calibre 3861. This ground-breaking movement has taken the legendary Moonwatch calibre to new standards of excellence, with anti-magnetic innovation, as well as Master Chronometer certification from the Swiss Federal Institute of Metrology (METAS).

The timepiece comes with OMEGA’s full 5-year warranty, and will not be a limited production. Eager fans will receive the watch in its own Apollo 13 presentation box, with a microfiber cleaning cloth, a brochure, and a magnifying glass to help you get up close to the details.

VIEW ALL OMEGA AT LAINGS