We’re only in January, yet OMEGA is already making one of the biggest watchmaking announcements of 2021. Their latest iteration of the icon model is certified at the industry’s highest level and is now Master Chronometer Certified. Here we explore the legacy of the Speedmaster Moonwatch and the exciting launch.

This year, the Speedmaster Moonwatch collection will be updated with its next generation of models. For fans everywhere, it’s a chance to see the latest edition of a much-loved timepiece – including unique touches in design and a powerful Master Chronometer certified anti-magnetic movement.

The Speedmaster was first introduced in 1957, little did they know that this watch would become part of history. In 1965 NASA declared it “Flight Qualified for all Manned Space Missions”, and it was strapped to the wrist of Edward White as he became the first American to walk in space. Four years later, as Buzz Aldrin and Neil Armstrong stepped onto the lunar surface for the first time in human history, the OMEGA Speedmaster became the first watch worn on the moon. The Speedmaster Moonwatch has been worn by the crews of all six lunar landings in history, becoming a truly iconic model. 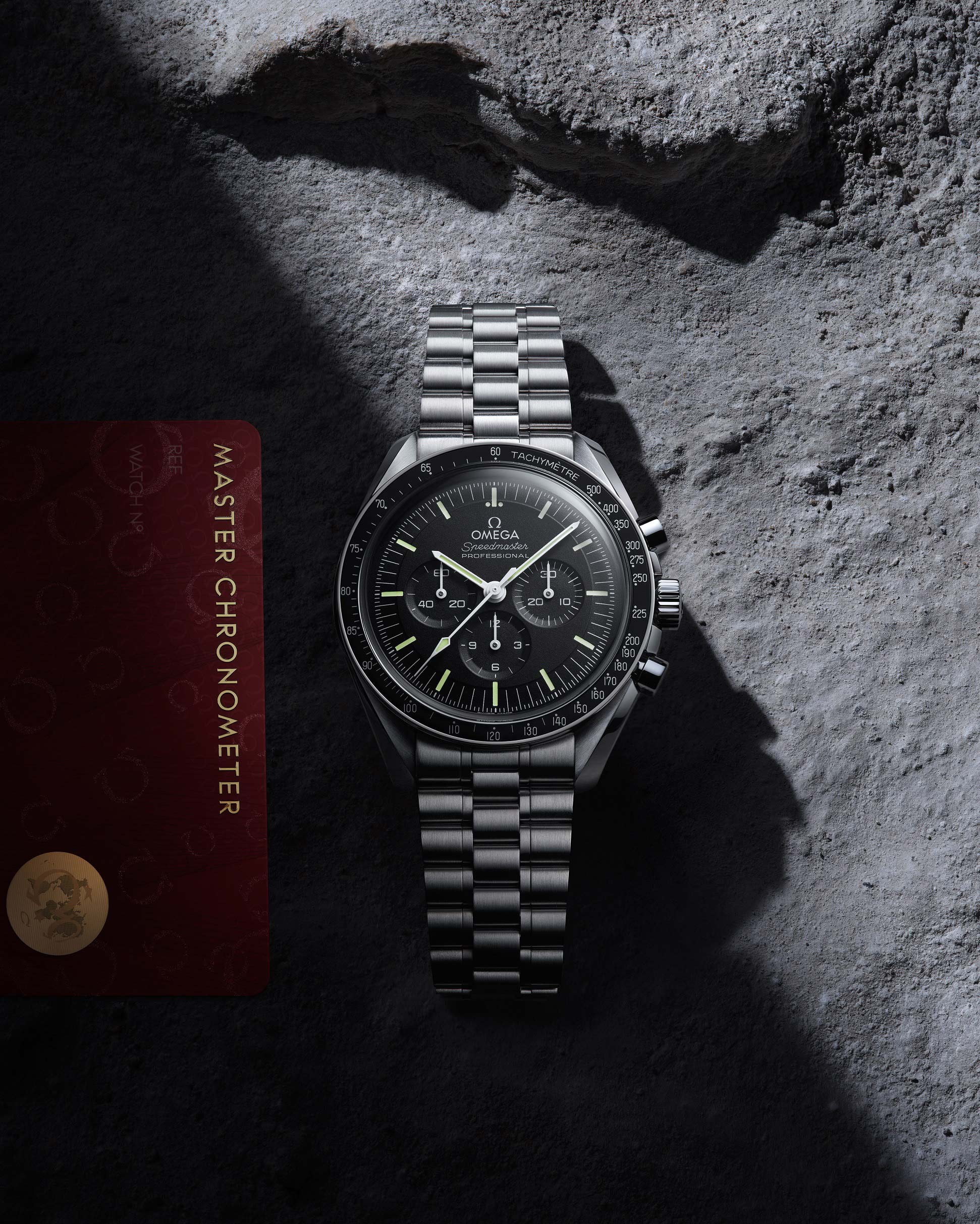 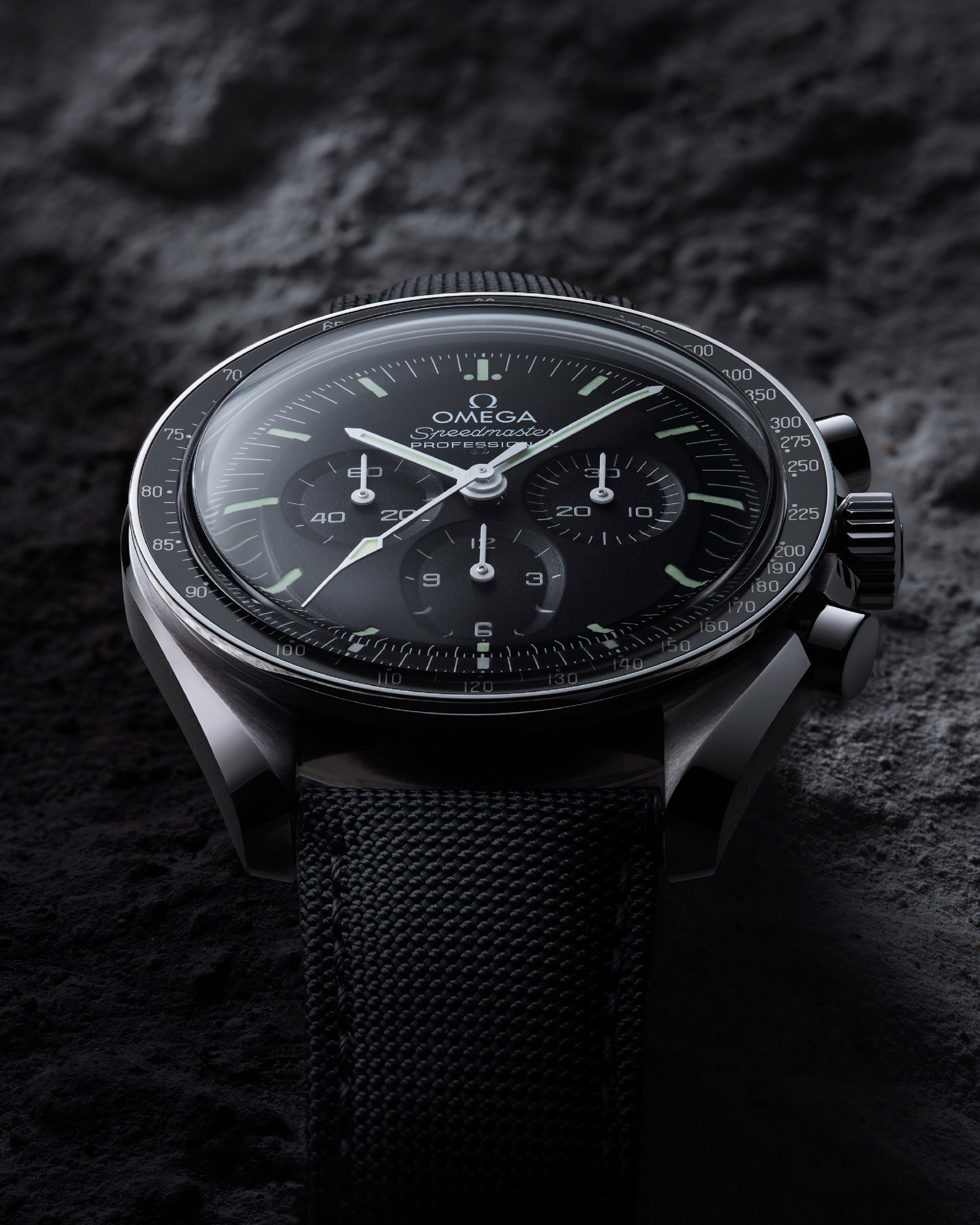 While many fans consider its classic design untouchable, even sacred, OMEGA’s legendary Speedmaster Moonwatch has always kept pace with technological change. This year marks the start of a new chapter in its extraordinary history. This is not about total transformation. It is a continuation of the legacy and a new chapter for one of history’s most recognised chronographs. The Moonwatch’s famous features remain unchanged, yet its standards of precision and anti-magnetism have been lifted to an exciting new level, giving watch lovers the best quality possible.

“When updating a sacred timepiece like the Speedmaster Moonwatch, every detail must be true to its original spirit. This chronograph is recognised the world over, so we’ve approached its design with the most sincere respect, while taking its’ movement to the next level.” – Raynald Aeschlimann, President and CEO of OMEGA

For this exciting redesign, OMEGA has taken inspiration from the 4th generation Moonwatch style – commonly referenced as the ST 105.012. Highly respected amongst watch collectors, the model is famed as one of the watches worn by Apollo 11 astronauts who landed on the moon in 1969. 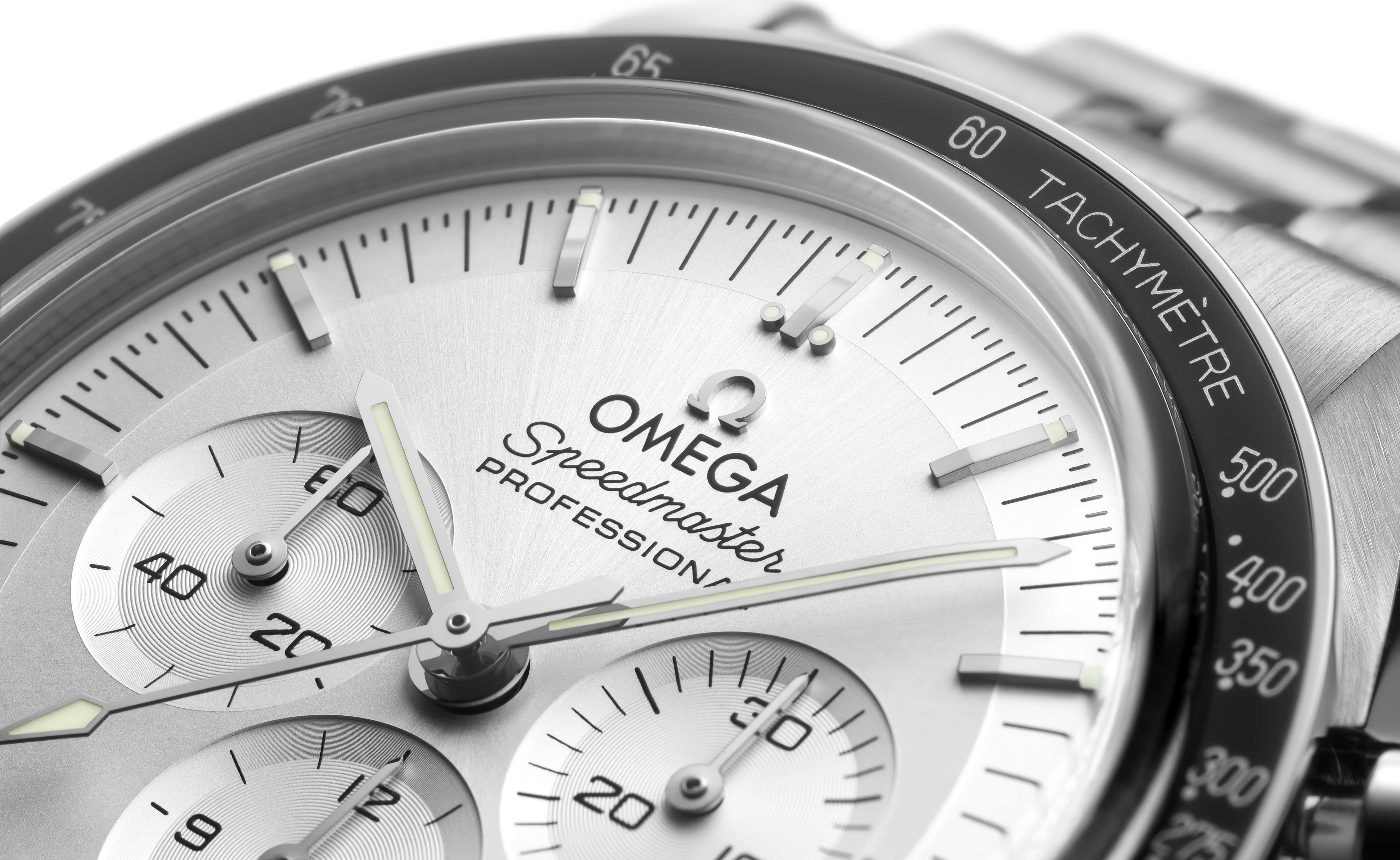 These space-era tributes include the classic asymmetrical case, the step dial, the double bevel caseback, and the famous dot over 90 (DON) and a diagonal to 70 on the anodised aluminium bezel ring. Small, but important details in the telling of the Speedmaster story.

Perhaps the most significant update comes with the arrival of the Co-Axial Master Calibre 3861. The new movement ensures that the Moonwatch will now be unaffected by even the most extreme magnetic fields reaching 15,000 gauss. In addition, it ensures that the entire watch is certified as a Master Chronometer – the highest standard of precision, performance and magnetic-resistance in the Swiss watch industry.

Around the wrist, OMEGA has made yet more changes. An integrated, fully-brushed bracelet offers a five–arched-links-per-row design. Similar to Moonwatch styles of the past, it includes a new clasp with a polished OMEGA logo on a satin-finished cover. 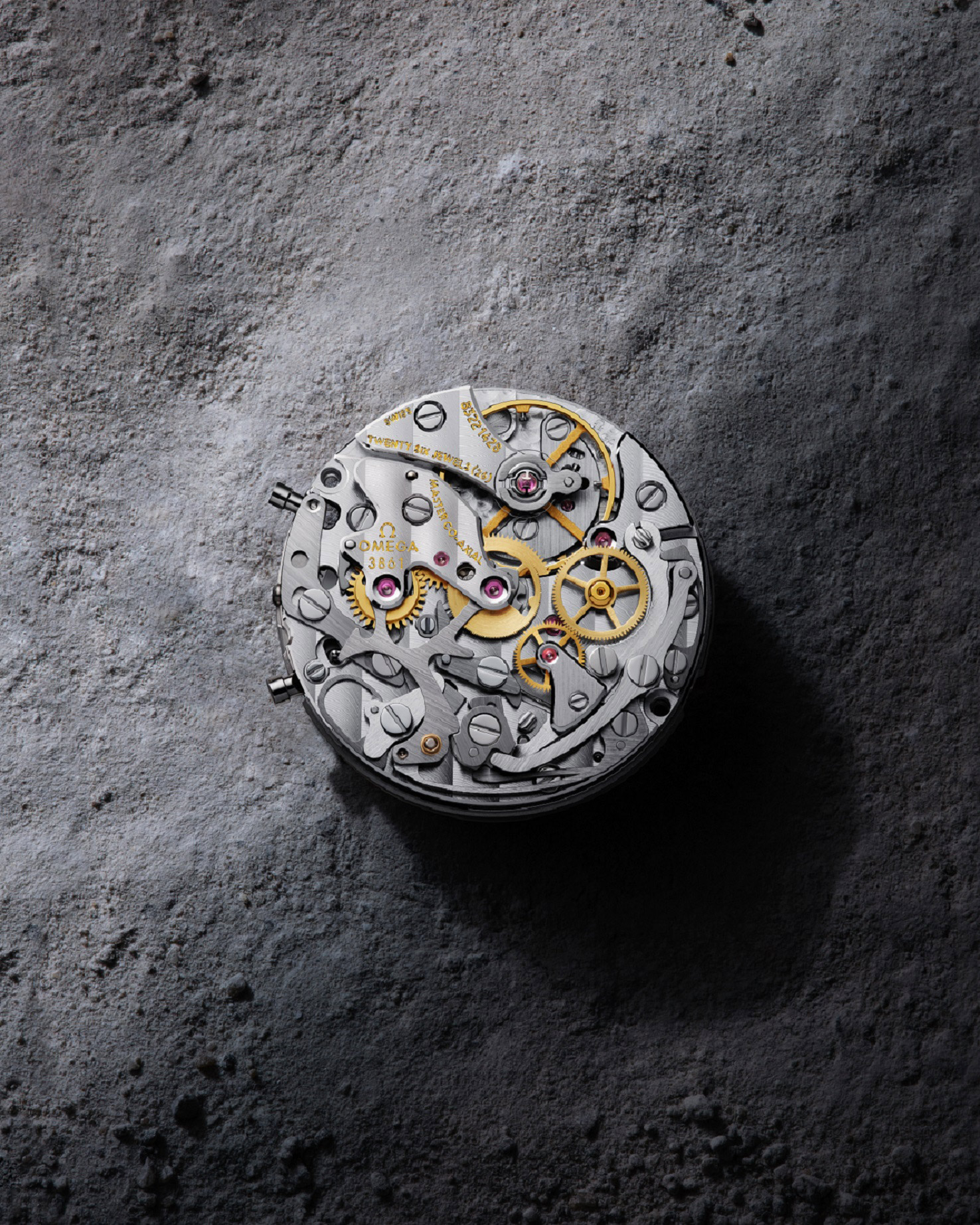 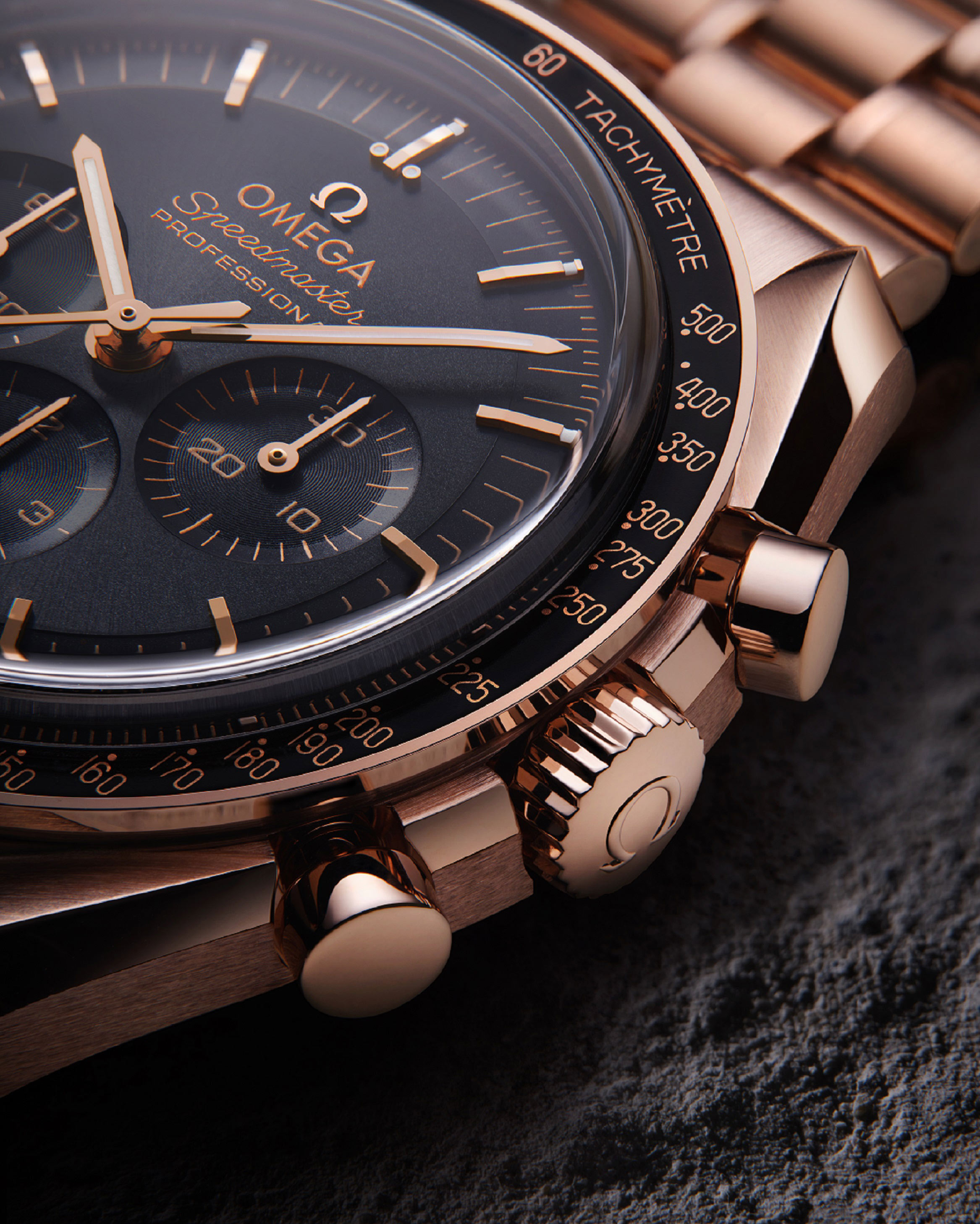 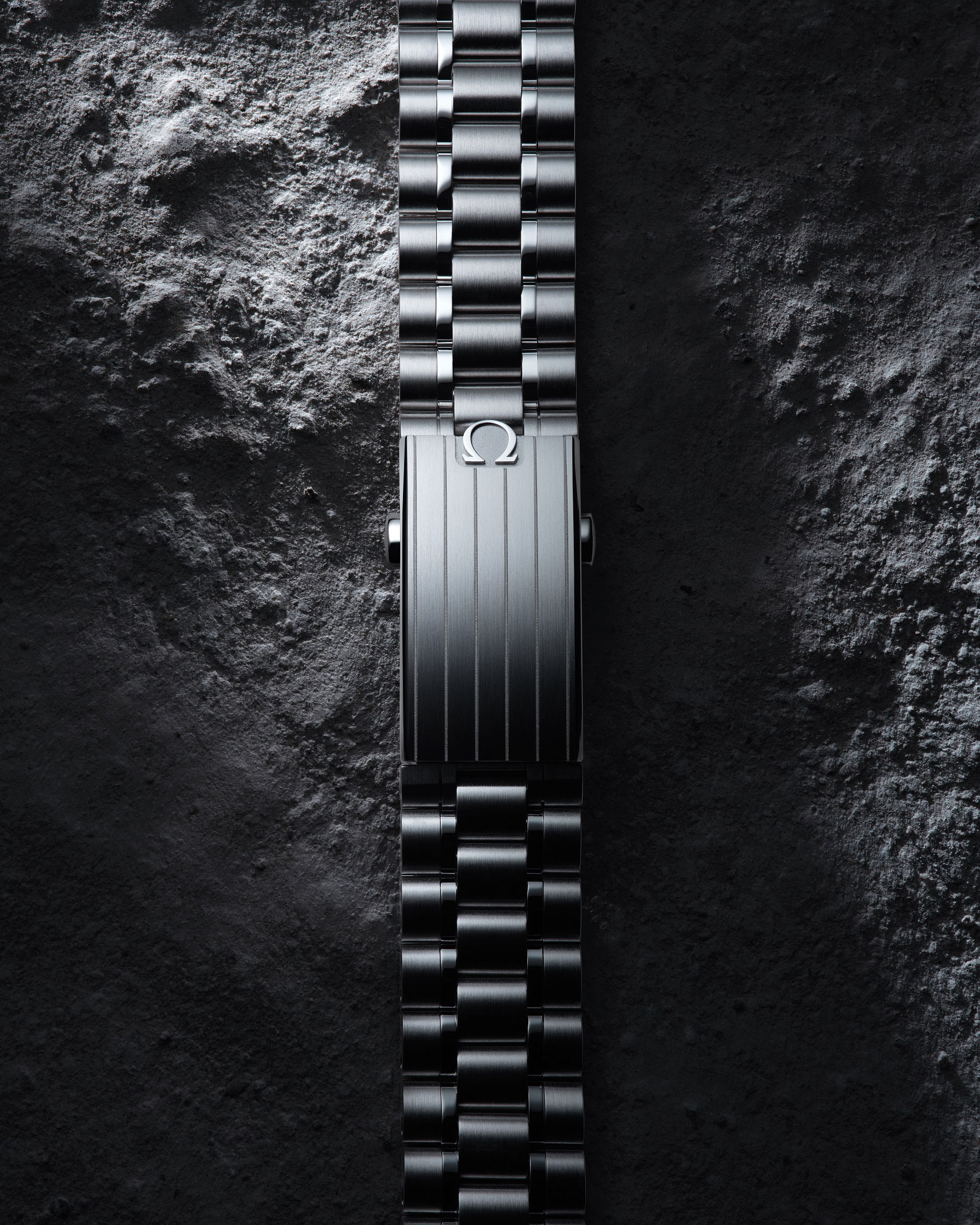 Even the dial shows the attention-to-detail that OMEGA has committed to this updated collection. In accordance with the Calibre 3861’s frequency, the minute track is now split by 3 divisions, as opposed to the 5 divisions on previous models. Another example of the brand’s exacting standards when it comes to precision.

With so much to explore, it’s now over to eager Moonwatch fans to select their Master Chronometer model from eight special choices, including versions in stainless steel, 18K Sedna™ gold or 18K Canopus gold™.  All come with OMEGA’s full 5-year warranty.

VIEW THE OMEGA SPEEDMASTER AT LAINGS